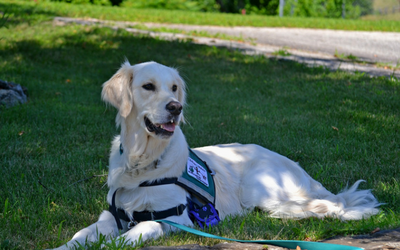 The History of Guide Dogs

The story of dogs being used as service animals begins in Pompeii in 79 AD. Excavations have revealed a wall-painting of a dog leading a blind man. Over the course of history there are records from Asia and Europe of dogs leading blind men.

The systematic training of dogs leading the blind began after the First World War in Germany. Many men were returning from the front line blinded by poison gas. A German doctor, Dr. Gerhard Stalling, got the idea of training dogs quite by coincidence. He and his dog were walking with a blind patient on the hospital grounds when Dr. Stalling was called away on an emergency. He left the patient with his dog and upon his return, he could see that the dog was looking after the blind patient.

Dr. Stalling began working to determine ways to train dogs as reliable guides and opened the world’s first guide dog school in 1916. The school grew and new branches opened across Germany, training 600 dogs a year primarily for servicemen, and later for civilians.

Over the next ten years, thousands of guide dogs were trained and working as service dogs, but the quality of the dogs had declined and the business venture failed. Luckily, another guide dog training center had since opened in Potsdam, Germany in 1923, run by the German Shepherd Dog Association.

In 1927, Dorothy Harrison Eustis, an American dog trainer visited the training center in Potsdam and was so impressed with it, she wrote an article for an American newspaper describing the methods and success of the training center. After hearing about the article, an American blind man, Morris Frank, contacted Eustis and told her he would like to introduce guide dogs to the United States. Eustis took up the challenge, trained a dog (Buddy) for Frank. Shortly after, Eustis established two guide schools; one in Switzerland and another in Morristown, New Jersey. Realizing the need for properly trained instructors, she established a training school for instructors in Switzerland.

With these successes, guide dog schools have opened all around the world. These schools train different types of dogs (vision, hearing, diabetic, seizures, autism, and service dogs) that help people with disabilities.

While German Shepherds were the choice breed post-World War One, some of the commonly used breeds today are Labrador Retrievers, Golden Retrievers, and Standard Poodles. Dogs are selected based on the client’s physical capabilities, mobility needs, and personality.

Some etiquette to remember when encountering a puppy or dog in training/working:

Essentially, when the dog is in its harness, it is working and should not be disturbed, as any other person who is working. Speak to the handler instead. Once trained, guide dogs are allowed to go any place where people go including taxis, restaurants, movie theaters, and stores.

If you would like to support this program that helps so many people, but you do not have the ability to foster a puppy, consider making a donation to your local guide dog organization.

On April 26th, celebrate the empowering effect that guide dogs have on the lives of disabled people in our communities. These dogs work with their owners to allow them the ability to navigate their daily lives.

Through steady action, we will ensure a bright future for our beautiful planet.