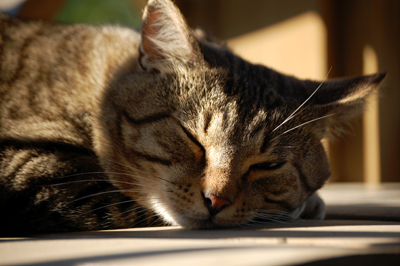 The 99 Lives Cat Genome Sequencing Initiative has set out to do what has been done with humans, rats, mice, and dogs – to map out the feline genome.

The Human Genome Project was an international project that mapped out human DNA has given scientists tools in all sort of areas, including: genetic diseases; genetic mutations linked to cancer; viruses and how humans are affected by them; forensics – the list goes on.

The full genome of domestic dogs was reported in 2004, with improvements to the sequencing continuing ever since. This information has led to all sorts of advances in canine medicine and treatment, plus some more information useful to human health. Now, it’s the cat’s turn.

A single cat genome sequence – an Abyssinian cat named Cinnamon – was reported in 2007, but a usable, high quality version wasn’t complete until late 2014. But one sequence isn’t enough – in order to work towards the benefits of genetic mapping, scientists must fully understand healthy DNA and genetic mutations, which means testing a large number of cats.

Dr. Leslie Lyons from the University of Missouri is leading the project, asking for sponsorship from veterinarians and veterinary colleges, cat registries, breed associations, pet food companies, and the public. It costs about $7,500 to map the full DNA sequence for one cat, so even though the technology is much less costly and more available now than ever before, it’s not exactly pocket change either.

The project has set a goal to map the genomes of 99 cats in order to have enough information to improve healthcare for cats – and for humans. In mapping the feline genome, scientists can get more information about genetic mutations that lead to diseases common to both species, such as kidney disease, diabetes, retinal atrophy, and more.

The team of researchers has mapped the genomes of 56 cats so far – a giant leap forward into providing the level of care that is currently available to humans and becoming more common for dogs.

Through steady action, we will ensure a bright future for our beautiful planet.